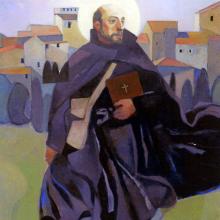 Our daily prayer in Sacred Space comes from the tradition of Ignatian Spirituality.  This is the term given to the work of St Ignatius Loyola, a 5th century Basque who underwent a radical conversion in his life.  Ignatius was the founder of the Companions of Jesus - the Jesuits.

Ignatius Loyola (Inigo) was born in 1491 one of 13 children born to parents of minor nobility in the town of Azpeitia, Loyola in the Basque region of Spain.  He was a worldly man and valiant knight known for his vanity and ambition.  The opportunity for his conversion occurred while he was serving the King of Navarre during a battle at Pamplona against the superior French army.  Despite the fact that Pamplona could not be defended against the mighty weight of the French, Ignatius gave the order not to surrender.  Ignatius was wounded by a cannonball leaving both his leg and his life shattered.  He spent many months convalescencing in the family castle at Loyola and during this time he underwent a radical conversion.

During the long hours of convalescence Ignatius was left reading the only available books in the house to pass the time.  These books were the lives of the saints and the Gospels as opposed to his usual choice of fiction.   Here the many hours of reading and reflection gave rise to deep spiritual experiences.    Ignatius noticed his reaction to what he was reading and that reading the lives of the saints and the Gospels gave rise of feelings of lasting joy and peace (consolation).   He also noticed that reading the worldly novels he had previously found enjoyable, satisfied him for a while but ultimately left him feeling empty (desolation).   These he felt were clues from God as to God’s desire for him and for the direction of his life.

Once Ignatius recovered his health, he left the family home in Loyola for Manresa and also left behind the life of a knight.  He began his life as a pilgrim which was a life of deep prayer, reflection and the performing of simple acts of kindness.  After spending many years walking around Europe he spent eleven years in Paris studying Arts and Theology (from 1524 to 1535).  Ignatius founded the Companions of Jesus in 1534 in Paris and aged 46 was ordained a priest.   He was the first superior of the Jesuit Order.  Ignatius died in Rome on 31 July 1556 aged 64.

Ignatius attuned himself to God's desire for his life by developing his relationship with the Divine by constant prayer.  He tried to “find God in all things” as he went about his day.   He spent much time in prayer and reflection and recorded many of his insights and reflections in a book.  This book is what we refer to as the Spiritual Exercises and has become one of the most important and influential books on spirituality and it continues to impact people 500 years later.

The Spiritual Exercises offer many forms of prayer to people to help them develop their relationship with the Divine and achieve a contemplative presence in their lives.   One of these forms of prayer which was essential for Ignatius is the Examen prayer.  This is a form of prayer that helps people develop a sensitivity to noticing where God is in the everyday bits and pieces of their lives - the various events, struggles, joys, etc. The Spiritual Exercises were written by Ignatius while he was a layman and based on the everyday issues of the ordinary person.  Ignatius noticed the touch of God in the everyday and shows us how we too can notice and experience the touch of God in the ordinary.